Roger Pysden undertook the challenge because the charity is close to his heart and he wanted to improve his personal fitness. Beginning in London after six months of hard training, the three-day stint took the cyclists out of the city and through the countryside to the East Coast. They then caught a ferry to Holland and finished the challenge in Amsterdam.

“The aim was to raise as much money as possible for Children with Cancer UK,” Mr Psyden explained. “The work the charity does for children with leukaemia is a cause I very much support, so I put in all I could to ensure I was fit enough while drumming up sponsorship and support. Alongside completing the challenge, I am also pleased to say I was recognised as raising the most funds!”

John Bellière, Director of BSW, said: “Roger has done an excellent thing and should be proud of his achievement. Not only did he overcome a physical challenge, he also helped to raise a tremendous amount for a worthy cause.”

Children with Cancer UK is a national children’s charity that is dedicated to the fight against all childhood cancers. An average of 1,603 children are diagnosed with cancer each year. The charity’s funds help to determine causes and find cures, as well as provide care and support for children suffering from the disease.

“I am delighted to have raised so much and hope to continue my work for Children with Cancer UK,” Mr Psyden concluded. “I have supported the charity for a long time, but the cycle ride gave me the chance to really make a difference. I am grateful to my friends and colleagues at BSW for their support.” 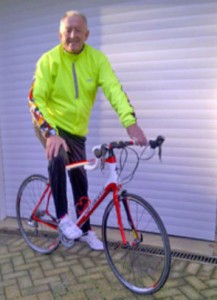